In line with the recent launching of the ASEAN Economic Community (AEC), GOInternational Finland will have a series of articles and infographics discussing the business-economic situation and development in Southeast Asia, and the countries composing the ASEAN — Brunei, Cambodia, Indonesia, Laos, Malaysia, Myanmar, the Philippines, Singapore, Thailand, and Vietnam. In addition, we will also provide insight on the diverse and unique business cultural dynamics of the region.

Being the world’s seventh largest economy with a combined gross domestic product of $2.4 trillion, and with over 600 million people, bigger than the European Union and the United States, GOInternational Finland recognizes ASEAN as a key and strategic market in internationalizing and exporting Finnish products, services, and innovation. Conversely, GOInternational Finland helps Asean-bound and Asean-based entrepreneurs and companies by providing business matchmaking services, business development, digital solutions, and trainings and events. 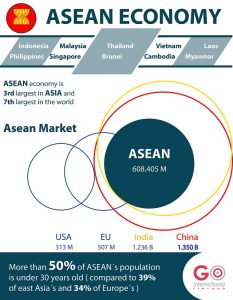 The ASEAN Community (AC) and the European Union (EU)

After years of sustained consultation, consensus, and cooperation among 10 ASEAN member-countries (Brunei, Cambodia, Indonesia, Laos, Malaysia, Myanmar, the Philippines, Singapore, Thailand, and Vietnam), the ASEAN Community (AC) was launched in December 31, 2015. Unlike the European Union (EU), the AC aspires for more economic and financial integration without a monetary union or political integration.

The establishment of the ASEAN Economic Community (AEC) within the ASEAN Community (AC) framework heralds the rise of a new Asian economic tiger, offering opportunities in the form of a huge market of US$2.6 trillion and over 600 million people.  AEC aims to create a single market and production base, which will allow the free flow of goods, services, investments, and skilled labor, and the freer movement of capital across the region, thus making the 10 ASEAN countries economically integrated, but also sustainably and gainfully integrated in the global economy.

AEC echoes the formation of the EU’s European Economic Community (EEC) back in 1957, and incidentally, ASEAN and EU have been engaging with one another since 1972. Since then, EU and ASEAN have built an ever-growing commercial relations. EU is ASEAN’s third largest trading partner, while ASEAN is the EU’s 5th largest trading partner.  Latest figures show that the total trade between ASEAN and the EU amounts to US$ 246.2 billion. Exports to the EU amounts to US$124.4 billion, while imports from the EU amounts to US$121.8 billion. The EU is also the biggest source of Foreign Direct Investment (FDI) into ASEAN amounting to 24% of total FDI inflows.

The EU has concluded a Free Trade Agreement (FTA) with Singapore and is negotiating FTAs with several other ASEAN countries (Philippines, Vietnam, Thailand, Malaysia). Additionally, the EU negotiates an investment protection agreement with Myanmar. These agreements are ways forward towards a full-fledged EU-ASEAN region-to-region FTA.

For outsiders who would like to venture and profit from what the ASEANregion can offer, one must be fully equipped to understand that its 10 member-states are diverse and varied across political, economic, and cultural spheres. ASEAN though an Asian region is different from China or India. The challenge of diversity is highly present in the Asean region, and one must possess a good grasp of ASEAN’s uniqueness to operate smoothly in the region.

Politically, ASEANcountries represent an array of different political systems. To cite a few example — Vietnam has a single-party socialist government whilst allowing free market economy akin to China’s system, Thailand is under a constitutional monarchy with a military organization running the affairs of the nation; the Philippines has an exuberant democracy with an oligarchic economy; Singapore possesses a distinct political culture: authoritarian, pragmatic, rational and meritocratic; and Brunei is being ruled by an absolute monarchy similar to some Middle Eastern countries.

Culturally, ASEANis a melting pot of different religions, languages, ethnicities, and ways of living. To cite as an example, Indonesia has the world’s largest Muslim population, whereas Philippines is the 5th largest Christianity country; predominantly Roman Catholic nation in Asia, while Thailand and other continental ASEANcountries are predominantly Buddhist. English is the official language in ASEAN. The medium of communication is English; it is  commonly used by leaders as a working language in meetings and any decision-making process.  English is also used in countries that recognize it as their official national language, such as Singapore, Malaysia, and the Philippines. While the rest of ASEANcountries use their national language and rarely speak English on a daily basis.

Against this kaleidoscopic backdrop, it is very important for entrepreneurs and investors to make themselves aware, knowledgeable, and fully equipped to tackle and navigate ASEAN’s rich diversity and huge potential. GOInternational Finland through its local country experts would assist and help you succeed in ASEAN. For instance, we facilitate specialized trainings on a relevant selection of key topics including cross cultural understanding within the Asean context. We can find you a suitable business partner in ASEAN. We can also develop your business model in-tune with the realities on the Asean ground. We can also facilitate your business trips in all of the 10 ASEAN countries.

Know more about what GOInternational Finland can do for you and your company as you plan to venture into ASEAN, visit our website at www.gointernational.fi

Have you got what it takes to win in emerging markets?